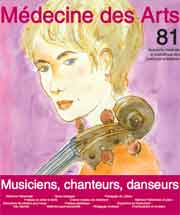 Number 81 on the health of the singer, musician, and dancer
Medical and scientific approach to artistic practices
French Journal
Free shipping

In this issue of the Medecine des Arts, two articles deal with the Feldenkrais method applied to artists. Self-analysis shows the influence of this method on the practice of a pianist. Moreover, what could be the benefits of this method in the teaching of rhythm for the dancers and musicians? The analysis of rhythm problems encountered by professional dancers and musicians, and students, as well as workshops on this topic helped highlight the strengths of this method, which could be integrated into the teaching of dance and music.

The violin is traditionally and almost exclusively practiced on the left shoulder. However, it is possible to play on the right, and there are a number of violonists who can vouch for this playing position. This study provides insight into the reasons and consequences of this side change.

What are vocal cord lesions of singers encountered in a phoniatric consultation? A retrospective study over two years allows to highlight lesions in half of them. Singers should be examined when not suffering from an acute epidode, so as to obtain individual baseline data.

The double-movement concert harp has seven pedals, each having three positions. After reflecting upon the ergonomics of the instrument and searching for a more comfortable playing, the author, a harpist, designed a set of pedal extensions. These interfaces allow the harpist to have a more physiological playing position.

Playing the Violin on the Right

The conventional way to play the violin, i.e., on the left shoulder, seems to be a hard and fast rule for this instrument. It is possible, however, to play on the right, and there are a number of musicians who can vouch for this playing position. The starting point of the present study was the case of an 8-year-old girl who began violin lessons with a left-hand handicap (hypoplasia of the thumb, operated on at the age of two years). The functional limitations of this hand led his teacher to consider reversing the playing side (bow held in the left hand). The pedagogical and psychological constraints were great and adaptation of the instrument required the intervention of a stringed-instrument maker. The side change proved beneficial in terms of the girl’s progress on the instrument.

The author draws up a list of professional right-side violinists having or having had a successful career. The strong influence of conventions, a priori aesthetics for group performances, longstanding academic traditions, and reticence in the world of music are such that, even today, learning to play the violin on the right is virtually never chosen unless the student has a congenital or accident-related disability. The question of which side to play on has now become an option. Several of the right-side violin players contacted by the author develop their point of view and report their experience on this subject.
Pascale Bazelot

The present research was aimed at studying a population of singers examined by a phoniatrician. More specifically, it is a retrospective study involving 96 singers who had consulted Doctor Amy de la Bretèque at the Timone Hospital in Marseille over a period of 24 months.

In this population, 48 of the singers presented vocal cord lesions, including nodule (19.8%), congenital lesions (cyst, sulcus, vergeture) (19.8%), fusiform edema (3.1%), polyp (2.1%), and Reinke’s edema (2.1%). Lesions were more frequent among women and among variety singers, and surgical treatment was required for 25% of the singers with lesions.

Vocal cord lesions among singers are relatively common. It is therefore useful for singers to be examined when not suffering from an acute episode, so as to obtain individual baseline data. Prevention involving good vocal hygiene and a safe vocal technique should be emphasized.
Solange Milhé de Saint Victor

Aimed at identifying the impact of the Feldenkrais Method on piano playing, this qualitative study is based on a self-analytic approach in which the author, a pianist himself, describes, documents, and analyzes the observed effects of this method on his own piano playing.

The material analyzed includes 13 self-observation sessions spread across a period of five months. From the detailed accounts obtained, various concepts emerged, each one illustrating the influence of this psycho-corporeal method on piano playing.

The data analysis pointed out the merits of the Feldenkrais Method for this pianist, and in a broader perspective, suggests that practicing this method on a regular basis could be beneficial to musicians in general, in accordance with their individual expectations.
Jean-François Grondin

An Ergonomic Approach Developed Through Musical Practice: Extensions of the Pedals on a Concert Harp

After reflecting upon the ergonomics of the instrument and searching for a more comfortable playing posture, the author, a harpist, designed a set of pedal extensions. After several prototypes were made, the extensions were manufactured by a French harp maker. When the extensions are used, foot movements are reduced and greater stability of the pelvis is achieved, in addition to making it easier to change positions, especially on the outermost pedals. Harpists can now adopt a more stable and more physiological playing position.
Chantal Mathieu-Balavoine

Rhythm and the Feldenkrais Method

Do musicians and dancers encounter difficulties related to rhythm? If so, what are they, what are the consequences and do those who teach in conservatories run up against these difficulties with their students? These questions led the author to gather information from professional and semi-professional musicians and dancers as well as from students engaged in the study of music and dance in conservatories. The survey included both a written questionnaire and interviews.

Results : From the point of view of the students : none complained about problems with rhythm but all suffered from muscular tension and felt it more with velocity.

From the point of view of the teachers : They clearly indicated that music and dance students often lack rhythmical precision (beat, length of a note, keeping the tempo, etc.). On another level, all teachers were perplexed about how to convey, through a better "embodiment" of rhythmical precision, the freedom necessary to let the musicality express itself. They were generally against the use of the metronome for this reason and unanimously wished for a study program in conservatories offering more time and space for the teaching of rhythm.

Following this survey, the author, a Feldenkrais practitioner and physical therapist, gave a six-week workshop to a group of music students in a conservatory to test and develop an approach to rhythm through movement, based essentially on the Feldenkrais Method. She observed that rhythmical precision was definitely lacking, more so while in movement (in body percussion exercises for example) than while playing an instrument where muscular tension came to compensate their lack, this tension being a first step to more serious problems leading sometimes to a modified and rigid posture. Breathing patterns are also often altered as a result. In general, a lack of "flow".

Oddly, dance teachers observed the same problems concerning lack of rhythm, muscular tensions and altered breathing induced by a lack of rhythmical assurance and by speed.

The goals would be to develop a more acute kinesthetic sense, to sharpen one’s sense of space, time, of chronological sequences within a movement, to develop coordination, open up new neuro-motor pathways, enlarge one’s attention to more consciousness of one’s gestures. For all of these, the Feldenkrais Method seems to be particularly suitable.
Tania Kraus

Portrait of the artist as worker N°81

Chronicle MDA, Burn out of musicians