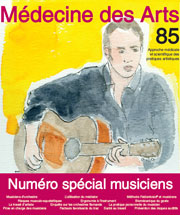 The articles of the journal are not sold independently, the price of 14 euros corresponds to the price of the whole magazine, all articles and chronicles.

In order to cope with health problems commonly encountered in a given trade or profession, occupational physicians need to establish a prevention plan. The health problems of professional musicians have been studied in various countries. The aim of the present study was to examine the health problems of orchestra musicians in the Flemish region of Belgium. A questionnaire was devised on the basis of the medical literature and distributed to 391 professional musicians who played classical music in orchestras in Brussels and Flanders. The 151 responses obtained indicated that the most frequent types of disorders were muscular or joint-related. Hearing complaints were also numerous. The musculoskeletal disorders reported were mainly located in the shoulder and neck areas, especially among female musicians. Their male counterparts most often reported backaches. In this study, musculoskeletal disorders were found to be significantly linked to both gender and to work-related stress.
Docteur Trees Dooms

The Feldenkrais Method® is a method of somatic education that enables its users to become aware of their movements in space and with respect to the surrounding environment. The scientific literature on the effects of the Feldenkrais Method® has been growing since the 1990's. The present article deals with eight studies on the treatment of musculoskeletal disorders. From the methodological standpoint, the populations studied, types of pathology treated, parameters assessed, and protocols used in the studies examined varied from one study to the next, which makes it difficult to draw definitive conclusions about the effectiveness of the method. A strong tendency stands out nonetheless: first and foremost, the Feldenkrais Method® significantly helps alleviate painful symptoms. Other promising outcomes include improved posture in the direction of greater erectness, and less perceived effort during certain motor tasks.

Given the high demands of instrument playing and the frequency of musculoskeletal disorders among musicians, the Feldenkrais Method® can be seen as an aid in treating and preventing such disorders in this population. Lastly, beyond medical and preventive issues, the method can also help musicians to improve their movement technique, exert just the right amount of effort as they play, and achieve higher performance and probably greater endurance as well.

Additional studies are needed to confirm and extend the results obtained here, and to provide further evidence of the well-foundedness of the Feldenkrais Method® for musicians.
Docteur Sophie Gleizes-Cervera

A Musician, an Instrument ... a Hearing Risk?

Studies on auditory risks among musicians agree on what sound levels can be considered high during repetitions and concerts. As a result, primary prevention measures are set up in the locales where professional musicians play. But are musicians always aware of potential hearing risks when they practice alone? Depending on what instrument is at stake, the sound level can cause damage to a musician's hearing when he/she is practicing, and the use of hearing-protection devices must be recommended and encouraged. Importantly, the choice of a hearing-protection device must be based not only on the actual volume reduction offered by the particular device, but must also take into account the precise level of sound exposure the musician undergoes.
Patricia Darche, Tony Leroux

Using the Pick on the Guitar: Biomechanical and Ergonomic Implications

The pick, a modern version of the secular plectrum, is an indispensable interface for achieving certain musical styles on acoustic, electric acoustic, and electrified guitars. Although the pick might appear easy to use, in reality a lengthy learning period is required in order to achieve proprioceptive and musical mastery. The wrist plays an essential role when the pick is used because it contributes to proprioceptive tuning and hand stability.

The author analyzes the biomechanical aspects of holding and using the pick, including how the length of the guitar strap can alter the movement amplitude of the joints. The musician's search for a physiological playing technique should be based on the principles of functional biomechanics.
Isabelle Meunier, Kinésithérapeute